VR has been around for several years now and the number of games available to play especially on PC is vast and varied, to say the least. There is nothing worse than trawling through title after title and dropping your hard-earned cash on something that ends up not being worth your time or effort. So, instead, let us do the heavy lifting for you!

We have compiled a list of must-have, essential PC VR titles. We’ve tried to cover a wide range of game types and genres and cherry-picked the best of everything. So, whether you’re into puzzles, shooters, RPGs, meditation, horror, or rhythm games, there’s something to suit everyone here. Without further ado, we now present the Best PC VR Games! 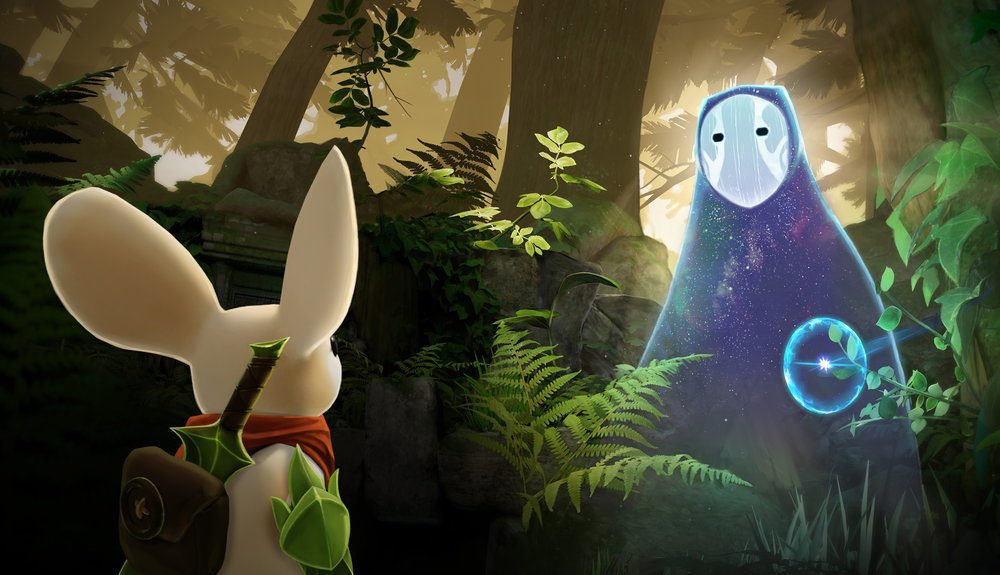 A beautiful fairytale-like adventure to start us off. You control two characters which could only be possible in VR. Your own head movements are that of a spiritual-like deity who can manipulate the environment to solve puzzles, remove obstacles and progress the plot. Your controllers take care of an anthropomorphic mouse as you jump hack and slash through the worlds laid out in front of you.

As far as puzzles and platforming, this is a very satisfying experience. Where the game really shines is in its creative storytelling. This tale is very moving and beautifully unfolds as you push through each area. Moss, as a character, has more charisma and charm than most, and the way she conveys her thoughts with no dialogue is as impressive as it is heart-warming.

The art direction and visuals are beautifully crisp, and the animations are silky smooth. You will lose yourself in the world of Moss and may find yourself coming back for repeat plays after the credits roll. Not one to be missed. Photo from I Expect You To Die Game Press Kit Photo from I Expect You To Die Game Press Kit

I Expect You to Die and its sequel is very similar. In fact, I would consider the sequel just additional levels to the first. If I had to pick between one or the other, I would possibly pick the second title as I feel the addition of Will Weaton’s voice work and the continual narrative thread from mission to mission slightly elevates it above the first experience. That said if you can afford it, pick them both up.

In either title, you play as a James Bond-like spy in ever-increasingly dangerous escape room situations. The entire experience is played seated which I enjoy. It’s a great title to get stuck into after a long day as you can play each level the way the developers intended without leaving your chair! The levels themselves are a combination of puzzles, timing, and quick wits as you try to survive and escape each threat as it happens.

The use of telekinesis to manipulate objects is also excellent and there is a healthy sense of humor at the heart of these wonderful titles. Drive cars out of cargo planes, survive imploding submarines and even booby trap mansions with a dumb waiter are all par for the course here. All in a day’s work for an international spy of course! If you like puzzles and trial & error mechanics in life-or-death moments, then you’ll love this game. In fact, you’ll love both these games!

Speedrunning achievements, challenges, and hidden collectibles also may entice players for repeat playthroughs, and the flexibility to solve puzzles in different ways offers extra enjoyment when experimenting. A fun game to play on your own or with friends. As far as rhythm games go, they’ve suddenly become a dime a dozen in Virtual Reality. This is mainly down to the soaring success of Beat Saber. The original and still the best, this game is as addictive as it is fun! The premise is simple. Hit the boxes with your lightsabers in time to the music. Its basic rudimentary idea is what makes it such a success. You don’t have to have any VR experience or even any gaming experience to play Beat Saber. You can get your Granny to play this one after a few gins and watch the good times roll!

Even though it’s so easy to play, it’s quite difficult to master, which is why it’s so addictive. Cranking the difficulty up and trying to get through each song while also crushing your high score is almost frustratingly addictive. You’ll find yourself exhausted from all the cardio you’re getting but also unable to stop as you want to progress. This game is a great workout without feeling like one, which is ideal. The tracklist is ever-expanding, and there is rarely a song that isn’t catchy on the list.

With the PC version also, you can crack Beat Saber wide open with mods and add your own custom tracks or if you’re lazy and uncreative like me, you can download other players’ creations. The sheer expansive library of amazing songs available means you’ll be able to find all the hits you like and build out a banging playlist to get your sweat on to. Don’t let this one pass you by, the OG is still the champion of rhythm games. You’ll soon be seeing flying boxes in your sleep! Loosely based on the hit TV show, Saints & Sinners offers a well-polished zombie survival game. Definitely a tense horror experience where you walk a tight balance between risk and reward. The shooting mechanics and melee combat feel satisfying and realistic. Building up your arsenal and experience adds elements often seen in RPGs and rarely in a horror zombie game. Multiple pathways to follow and moral choices to make with NPC encounters add some immersive depths to this title as well.

Also, the passage of time within the game helps to rack up the tension even more. Being caught out at night means more danger and more zombie encounters than perhaps you can handle. Beyond the zombie hack and slash veneer though, this is a well-thought-out gaming experience. Realistic physics and emotional gameplay interactions help to elevate the experience while also throwing a gripping story our way.

You will experience empathy, joy, and desperation on your journey through the Walking Dead and overall, it’s a very balanced accomplished piece of work. Just make sure you play with the lights on and keep a duvet close to your hand! A very difficult game to describe. A bit like the Matrix, you have to see it for yourself! The visuals are crisp but basic. Characters are polygon-based and each area is saturated in white. The appealing catch of the game though is in its movement-based combat. Time only moves when you do! Or to be more accurate, time moves molasses levels of slow if you stand still but if you shoot a gun … watch out!

Presented almost as a John Wick experience you are placed in obvious action set pieces where you can throw punches, knives, ashtrays, and kitchen sinks while dodging incoming bullets and guards. There’s a lot more to it than that, but at its heart, it’s an action-based puzzler. You’ll find yourself contorting your body as you take out your enemies in style. Style is the name of the game here as Superhot does a great job of making you feel like a badass.

You’ll find yourself in situations where you’re flinging an ashtray at one guard while shooting another with your other arm all while ducking to dodge an incoming shotgun blast. You can’t allow yourself to be hit so once you do manage to pull off a cool maneuver and decimate a roomful of guards … you’ll really feel a sense of reward. This becomes an addictive loop, and you’ll find yourself progressing more and more.

The story itself also has layers to it and there are meta elements of self-awareness which again add to this overall cool sci-fi experience. I love this game. Go be Keanu Reeves! Dodge bullets like Neo and take guys out like John Wick, what could be more perfect right? At the top of the list, I said that these titles were in no particular order. That was a bit of a fib. I saved my favorite and number one recommendation for last. Half-Life: Alyx is absolutely amazing! A first-person shooter made by Valve the game takes place between Half-Life 1 and Half-Life 2. You play as Alyx on a wild adventure blasting your way through the combine to rescue your captive father.

The level of polish here shouldn’t go unstated. The gameplay, physics, art design, narrative, and combat all combine in a glorious immersive tale worth playing through by everyone. Gun battles are always intense, and creativity is encouraged to survive. Beyond the first-person shooter aspects though, the world itself is glorious to explore. Wandering through the dilapidated City 17 feels both fresh and familiar to anyone who has played Half-Life 2.

Getting to be a part of this world feels like a fully realized dream and this game is superior in everything it does when compared to most other VR titles. You’ll find yourself exhilarated as you take a journey through this amazing single-player campaign and can add longevity to your gameplay with many users created levels and mods available through the Steam workshop. Don’t sleep on this one, it’s truly a masterpiece in gaming and I include VR and non-VR when declaring this essential. Click to see a more in-depth full review for Half-Life:Alyx.

That’s the list! Enough to get anyone started whatever your genre preference may be. There are plenty more amazing titles that also deserve your attention, but these are a brilliant starting point if you’re searching for something special.