These are the Best VR Horror Games for Quest, Quest 2, PSVR, and PCVR!

Heart pounding, chill-inducing, jump out of your seat scary VR horror is here, and we LOVE IT.

There’s something about being scared that makes video games even more exhilarating and fun to experience. And in VR, these thrills literally come to life before your own eyes.

If you enjoy a good horror-fest, startling scenes, and the excitement of making it out alive and in one piece, our compilation of the BEST VR Horror Games will be right up your alley.

From intense psychological thrills to gut-wrenching gore, these games are sure to keep you up at night! This VR game is an enticing treat for horror fans. Placing you aboard a doomed spaceship, you’ll face an infestation of mutated colony members and horrific enemies. Choose to sneak past them or, failing that, bring them down with firepower.

If you’re into the horror genre and think that playing through Dead Space in VR sounds appealing, this title won’t be a disappointment.

Persistence’s randomized element provides a unique experience every time you suit up in VR, while its compatibility with traditional game controllers over VR motion controllers does give it a mechanical advantage.

Deep, calculated games for VR are few and far between, but the Persistence hits the mark. Evade, explore and fight to escape the depths of space while battling a murderous horde of aberrations. When it comes to story-driven single-player Horror VR gameplay, few titles live up to the bar set by Lies Beneath. Its narrative crafts an inspiring story taking place in the sleepy town of Slumber, Alaska.

Packed with action, this title features a full campaign mode with so many twists and turns, who knows where it will take you next!

Aesthetically, the game has an appealing style, with comic book panels for story moments so you’ll feel like you’re living out the pages of a graphic novel in VR.

When it comes to putting the hurt on the bad guys, the game is split 50% – 50% between shooting weapons like shotguns and battling the hordes of monsters with melee weapons such as knives or axes.

As a returning college student to the quaint town of Slumber, you’ll use these weapons in your efforts to save your father (and your sanity) from the creepy creatures that lurk in the shadows and the terrifying townsfolk. Half-Life: Alyx VR is a virtual reality experience that was created by Valve and released in 2020. It is a short, narrative-driven game that takes place in the Half-Life universe, a universe that many of you might already be familiar with from its past titles.

In this first-person shooter, you take on the role of Alyx Vance, and along with Alyx’s father Eli, you discuss the Combine invasion of Earth and a plan to escape from the notorious City 17.

As you embark on an impossible quest and fight against the vicious alien race known as the ‘Combine’, you seek out your pet robot Dog as you make your way to the White Forest, where you hope to find Dr. Kleiner and Dr. Eli Vance, who is working on an anti-Combine weapon called the “Alyx Gun.” Humanity’s only hope for survival is in your hands.

As far as Sci-fi horror goes, you can’t get better than this next installment in the highly acclaimed Half-Life series. Do you love a mystery? Have an inquisitive mind and a knack for investigation? Phasmophobia is the VR horror title made just for you. Although VR is optional for this title (a first in our list), the studio’s developer, British-based Kinetic, has announced extensive updates to support VR even further than with the original release.

As a co-op horror title, you can play online with up to four other brave souls, with randomized events that make every playthrough unique and challenging in a different way.

As for gameplay, you’ll partake in ghost hunting adventures with hyper-realistic graphics, plenty of hair-raising chills, and jump out of your seat scares. If you were to combine developers from Dead Space, Uncharted, and Marvel’s Spider-Man, the end result would be something akin to Edge of Nowhere.

Edge of Nowhere might be showing its age a bit, but this stealth-adventure title still remains among the most well-polished VR games to date.

Based on At the Mountains of Madness by none other than H.P. Lovecraft, Edge of Nowhere places you in the shoes of Victor Howard, self-tasked with finding his fiancé after her Antarctic expedition goes missing. 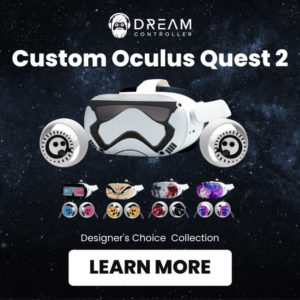 Although mysterious, suspenseful, and eerie, don’t expect cheap thrills or jump-scare tactics from this title. But don’t be fooled. The game has a way of craftily lulling you into a false sense of security before hitting you hard. It did such a good job that it left a couple of us shaking for a minute or two afterwards. Developed by Twisted Pixel Games, Wilson’s Heart can best be described as a first-person psychological thriller. Set in the 1940s, your character will awake in a transformed hospital only to find that your heart has been swapped out and replaced with a mysterious device.

You and fellow victims (patients) will traverse the maddening maze of haunting hospital hallways and other obstacles to discover what is real and what’s not … but most importantly, where your heart is.

Striking visuals, immersive VR touch controls, and a compelling storyline make this a must-have on our list of the Best VR Horror games. The Affected: The Manor was first released on the Gear VR and has since been updated for even more headsets. But its versatility and broad compatibility isn’t the only reason it made our list of the Best VR Horror Games.

Despite being an older title, Affected: The Manor still manages to deliver a solid scare and is an excellent introduction to VR for those who enjoy horror. The game can be completed in less than 60 minutes, and gameplay is void of any complicated puzzles or strategies, making it more approachable for newer players.

Full of screams and scares, the game takes you through a haunted tour of The Manor, navigating through dark hallways with just a candle to light the way.

The game has recently released two new updates adding additional game time and new ways to play, such as the “Gauntlet” which is a horror-themed speedrun through a series of haunted hallways. It can be fun to tackle it as quickly as possible and rank on the leaderboard as it offers yet another diversion. The latest Face Your Fears sequel is a fast-paced single-player campaign VR title where the horror never stops. Taking place in Harvest House, you’ll discover the hidden secrets of the long-abandoned house, playing through two spine-tingling storylines immersed in terror.

The game starts with you looking for your missing sister along the roads leading to the Harvest Estate. Ratcheting up the intensity throughout, scenario #2 puts you in the shoes of a paranormal investigator who has come face to face with the home’s inherited evil presence.

Find out if you can make it out, or if you’ll forever remain entrapped in Harvest House. Transference is one of Ubisoft’s hit VR games. The gameplay is different from many other horror VR games, with a focus on psychological horror rather than jump scares. Live-action acting adds to the realism of the game, set in an escape-room like setting inside of a deranged mind.

You’ll explore this terrifying new dimension, shifting between the varying perspectives of a family as you seek to unravel the mystery behind the subconsciousness of each person to discover the truth. Isolation and fear are two apt words to describe Resident Evil 7: Biohazard. This title in the blockbuster Resident Evil franchise offers a visceral first-person narrative powered by the RE Engine.

Experience true immersion as you enter a terrifying new landscape where survival is anything but guaranteed.

As one of the best VR horror games to date, Resident Evil 7: Biohazard takes an interesting departure from the core franchise. In this title, you swap 3rd person views for a first-person camera angle putting you face to face with grotesque monsters and ravenous zombies.

Intense tension, incredible detail, action, and scares make this a home run in our book.

If you’re into shock and awe, blood and gore, suspense and mystery, or scares that’ll have you jumping out of your seat, the best VR horror games won’t disappoint.

With new titles coming out frequently, keep your eyes and ears open for more than what goes bump in the night, and an eye on this page for updates regarding new titles, releases, and experiences that’ll give you chills and make your heart pound.