Oculus Quest 2 vs Quest 1 – Is it Worth an Upgrade?

Quest 2 vs Quest 1: A showdown of epic proportions

The original Oculus Quest 1 was one of the most hyped-up VR headsets to hit the market, and its successor, the Quest 2, is posturing itself up to have an even bigger impact. The new Quest 2 offers a range of updates on both the aesthetic and technical side of the spectrum, making it a real contender in the year ahead.

Is the Oculus Quest 2 worth the upgrade, or is it just another hyped-up shiny object with good marketing?

Ask anyone around the VR community and you’ll likely hear a lot of chatter about the Quest 1 being their favorite headset … and with good reason.
The original Oculus Quest is a stand-alone, lightweight, highly capable VR headset in its own right, enabling users to immerse themselves in new and exciting virtual worlds without the need for expensive and burdensome consoles or spec’d out PCs.

Yet many owners of the Quest are debating whether or not they should be saving up for its next-generation sibling, simply named the Quest 2. Since the announcement of the Oculus Quest 2, many have been wondering if they should upgrade to the 2nd model. Considering how good the Oculus Quest 1 was, many are a little hesitant.

We firmly believe that the Oculus 2 is one of the best VR headsets on the market (right now) and worth a deeper look. Although the headset is targeted mainly at first-time buyers, it does have some notable (and impressive) upgrades baked into the tech that we think deserves careful review.

As a result, we did a little research and put together a comprehensive buying guide. Our team rolled up our sleeves and sorted out the most important details so you didn’t have to waste any time sorting through the mess.

Oculus Quest 2 VS Oculus Quest: What’s the difference between these VR headsets? Original Quest VS Quest 2: Let’s start with some similarities

When comparing the original Quest vs Quest 2, it’s hard to overlook some of the commonalities they share. First up, you can expect to have all the same basic features you’ve come to love with the original.

One BIG PLUS for those considering the upgrade is that both the original Quest and the Quest 2 share the SAME library of VR games. When needed, such as with graphically intense games, both headsets can be tethered to a gaming PC with the use of a USB-C cable (Oculus Link).

The ability to tether the headset with a gaming PC using the Oculus Link was a major breakthrough for the Oculus Quest, putting it in the same category as those who purchased the more expensive and difficult to set up Rift.
In fact, use of the Oculus Link cable to do so enables the user to unlock the full power of their gaming PC, putting the Quest 2 and Rift on the same level and funneling heart-pounding VR gaming and exhilarating worlds right to their headset.

First and foremost, let’s look at the upgrades you get. The Quest 2 has a much sharper LCD screen, with a resolution of 1832 x 1920 pixels per eye, as opposed to 1440 x 1600 on the Quest 1. Although the original was acclaimed for its use of OLED (rare at the time for VR headsets), the Oculus 2 deviates from this and instead uses individual LCD panels for each eye.
Whereas the original Quest had a manual IPD slider, the Quest 2 has a new and improved system, enabling you to move the lenses into three distinctively unique positions: 58mm (setting 1), 63mm (setting 2) and 68mm (setting 3).

Another added benefit of the optics is that the Quest 2 supports refresh rates of up to 90Hz at launch, with Facebook confirmed a software update aimed at supporting a refresh rate of a blazing 120Hz sometime in Q2 of 2022. The improved resolution is one thing, but enhanced refresh rates are critical for devices that close to your eyes, and for fast-paced VR games like FPS or racing. This is one upgrade you’ll quite literally SEE and it’ll be a major differentiating factor for the new model.

On top of refining many of the user-friendly features of the Oculus Quest 1, the 2nd edition also brings some new horsepower under the hood. Just like its predecessor it is self-contained and does not require a separate computing unit.
The Quest 2 also has significantly more ram, going from 4GB up to 6GB, a welcomed upgrade especially for those who play resource-intensive games or applications. But the fun doesn’t stop there. The Quest 2 upgrades from a Qualcomm Snapdragon 835 processor in its predecessor, to a blazing-fast Qualcomm Snapdragon XR2.

Great care was taken by the engineers to improve upon the original design, making it increasingly comfortable to wear for longer periods of time. The new model weighs just 503 grams, a major weight loss from the original’s 571-gram weight on the scale. For those of you who aren’t good at math, that’s about a 10% difference in weight. It might not seem like a lot, but for those of us who wear our headsets for more than 20 minutes at a time, it can make a BIG difference in reducing head and neck strain, while also improving mobility. 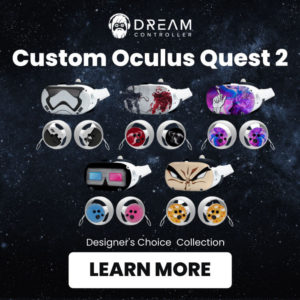 The Q2 also features a new adjustable head strap that makes it easy to find a comfortable fit for users of all shapes and sizes.
Lastly, the new Oculus offers three different preset positions (58mm, 63mm, and 68mm) to provide an ideal positioning for all facial structures.

Similar to the Quest, the Quest 2 also boasts a set of high-quality rear-firing speakers. Built into the strap itself, these speakers eliminate the need for entangling wires. Updated for the Quest 2 is a new positional audio feature, and each headset still sports integrated microphones to enhance multiplayer experiences and co-op gameplay. For those wishing to use their own headphones, a 3.5mm jack gets the job done just fine.

So, How Much will All of These Upgrades Cost You?

This might be the best part of this whole review.

Usually, when a new (arguably much better) product is introduced, it costs more than its predecessor. That is not the case with the Oculus Quest 2. The price of the headset starts at just $299. That’s right, literally $100 cheaper than the $399 price tag on the Oculus Quest 1.
Granted, that $299 is just for the base model, but still. If you want upgrades such as more memory (up to 256GB) for example, it’ll cost you.

What About the Controllers and Battery Life?

A VR headset is only as good as its usability. While the controllers have mostly stayed the same, there were some slight changes to them. It now feels like there is more thumb room to access all the buttons on the controllers.

The Oculus 2 comes out of the box with two controllers that have been redesigned to produce less LED light and use significantly less energy, resulting in a longer charge. How impactful was this update? The new controllers offer DOUBLE the battery life of the original while still running on a single AA battery. A good quality battery tends to last for a few months so you won’t need to constantly replace them either.

For the headset, the controllers can be used for up to 3 hours and are charged with a USB-C cable. The battery life may be much shorter if you are heavily gaming or consuming media. It will take up to 3 hours to fully charge. Keep in mind that you can use the Oculus Quest 2 while it is being charged, however, the cable is a little short and will limit your mobility. We recommend charging your headset whenever it is not being used.

Is Upgrading to the Oculus Quest 2 Worth it?

Upgrading to the Oculus Quest 2: What’s the verdict?

While the upgrades may seem slight, they will be noticeable to new and experienced VR owners alike. We think the redesigned controllers, higher resolution, and improved computer specs warrant an upgrade for those who enjoy the best experience.

However, we would not say this is an upgrade that everyone has to make. The Oculus Quest 1 is still one of the best VR headsets on the market and offers a lot of umph for a V1 model

That said if you play games that demand higher resolution, and that would benefit from a faster refresh rate and more RAM, the beefed-up and slimmed down Oculus Quest 2 is worth shelling out the extra coin. If you like to sideload games the extra RAM will help as well. If adult content is your thing the higher resolution definitely helps with immersion.

We think investing in an Oculus Quest 2 is a great way to connect and pass the time, especially when more of us are working from home and isolated from friends and family.